At this stage of the webinar, Shawn asked Teresa to tell the attendees a little about herself and the Christian County Sheriff’s Office.

Teresa said, “I have been here, at the Christian County Sheriff’s office, for about five years. The whole Sheriff’s office has about 145 people. When I came here, it was the first time that they’d ever had anyone who’d had an experience in evidence. It seemed like their thought process prior was… throw it in the room, take it to the lab if it needs it, throw it back in the room, and leave it in the room forever.” 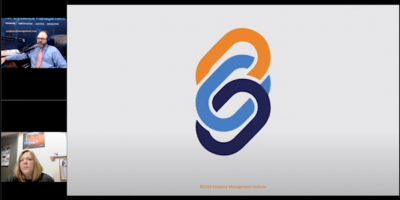 Teresa addressed the topics of leadership and authority, saying, “Leadership is defined as the art of motivating a group of people to act toward achieving a common goal. I use this a lot… I tell my officers that we are a team;  it’s not them and us.  Authority is the power to give orders, make decisions and enforce obedience. Or… [authority is when] you know more about a topic than most.

We’re a little bit different here because they do consider me part of the command staff, which I know is way different than most evidence places. I think they probably just did that because I had so much experience when I came on.

I tell the sheriff that this is the thermometer of his agency. If things are not good in the evidence room, then things are not good in his agency. People want, and they need leadership. Everything you say, and do, communicates your priorities. The officers know my priority is with evidence. I do training with every new deputy that comes on here at Christian County – along with the jail and our campus security.

I think trust is the backbone of any good relationship. And courage is the backbone of leadership. My sheriff has told me, on numerous occasions, that he trusts the decisions that I make for the evidence room. It’s really awesome to know that someone has that kind of faith in me.

But you have to be persistent. I’m persistent with my officers – and I’m very straightforward – I tell them, ‘This is your evidence, this is part of your case. If you mess this up, then your entire case is going to be messed up. I also tell them that if the evidence gets taken into court and it’s all crumpled up and it has evidence tape wrapped all the way around it – 255 times what do you think they think when they look at that? They think… if you’re going to do half of a job here, then maybe you’re doing half a job on everything else. They make assumptions about us, based on what we do for our work. So, I always say to be persistent. I’m constantly trying to influence my deputies. I’m really big for praising them when they do something right, but I will still call them out when they do something wrong.

I would also tell you to talk to your lab. A lot of times your lab would love to come and talk to your officers. We have one here in Missouri – one of our DNA analysts from the crime lab – he has a training that’s certified, so your officers get credit for that.”

Teresa spoke about the need for new evidence tracking software, saying, “We brought in an evidence system here. I had to show them that the system they were using was not working. So, I checked all of the meth in the drug room out to my captain. One day, I went into his office, I said, ‘Hey, you got all the meth, what have you done with it?’ And he’s like, what? And I was like… it’s just that simple for me to move it [without it being tracked.]. Now it’s your word against mine. So, where’s the meth? And he was like, ‘Oh, you have to do something different!’ And I was like, yes I do. So, we bought an evidence system.

The guys really did not like that because they had to do a little bit more work. I told them straight up – when we started the training on the evidence system – I don’t care whether you complain.  Because guess what… you’re going to do it, and this is going to save you when you’re sitting on the stand [in court] because there’s never going to be a question of your chain of custody. Now they absolutely love it. It’s just taken some time.

We also did a drug cage, a gun cage… they didn’t have anything here like that before. We’ve reorganized the property and evidence room completely. And, this year, our huge thing is working on destruction. I have been salivating about all of the disposition stuff that your guys are putting out.”

Shawn made an observation, and said, “I’ve just been listening to what you’ve just said, and you probably employed seven or eight different strategies for leading without authority and changing the culture at your agency. I think the first thing is… you came in with the knowledge and intention to make some changes. That’s the first step… you’ve got to make that decision to be a change agent. I am curious, how long had the sheriff been sheriff when you came?”

Teresa said, “Our prior sheriff was prosecuted. So, the sheriff that I have always worked for, he came as an interim and took over the rest of his term. He had only been here for like two, three months before I came on. He had been a deputy here prior to that. Now, he’s done one full term and he’s getting ready to run again. He has been awesome.

Shawn said, “I think one of the things that’s probably the most interesting to me, is what you talked about in terms of having expectations of your officers. You had expertise in evidence management, you were the expert and you weren’t afraid to leverage that knowledge and training that no one else had. And I think that’s important for people – evidence custodians especially – to understand that you are the expert in your building. No one, hopefully, knows more than you about evidence management than you. So you need to be that voice, and that advocate, for evidence management.”

Shawn shared a problem that most police agencies have, and how he himself solved it when he was new to evidence management. He said, “As far as management – that’s not supportive – I think that’s the situation a lot of people find themselves in. They’ve got an executive team or a command staff – depending on their organization – that just isn’t supportive of their needs. The one thing that you start doing is develop a strategy for making it important to them.

The easiest way that I know to do that is to measure your operations. Start measuring your performance so you can bring them something mathematical. I would also leverage opportunities to catch their attention. I wouldn’t recommend what I did, in order to make that happen… I found myself in an evidence room that had been neglected for decades and I didn’t know enough at the time to fix it myself. I didn’t have the training, I didn’t have the expertise, but I quickly developed that because I saw the importance of it, and I knew it needed to be fixed.

So, we had missing guns in our gun vault. We had two Colt pistols that were missing that nobody could find. We had a stack of guns – like cordwood in there – which hurt my heart every time I looked at them. I decided I’ve got to get their attention somehow. I’ve got to focus attention on this.

So… I made an internal affairs complaint on myself and I submitted that through the chain of command, up to the chief of police. And with a formal document like that, you’ve got to get some type of response. I was able to leverage that. They launched a formal internal affairs investigation against me – because I asked for it – and I didn’t know, at the time, any other way to get the ball rolling. I figured doing something bold is better than nothing.

And that really helped start to focus the attention on our unit. Sometimes you’ve got to do something bold in order to move the needle and push it in the right direction. I think now I could find better ways of doing that – less painful ways – but something is better than nothing.”

Ben Townsend, the CEO of Tracker Products joined the conversation and presented a statement and question from a member of the audience. He quoted them by saying, “My immediate admin does not want the evidence room accredited because they fear it’s going to open up attorneys to attacking our policies, procedures, etc. What would be a good way to present it to them, in a way that they could get on board because they think it would be good to get accredited.”

Shawn responded, “We exist in an era of transparency, in justice. The more transparent we are as law enforcement agencies, the better we are. There is no good reason for not pursuing an accreditation process; for not being open and honest with your policies. Attorneys have access to your policies right now. All of your policy manuals are fully discoverable. Your procedures, the same way. Every document that exists at your agency – with very few exceptions – is fully discoverable. Accrediting just brings an outside party to have an audit done; giving an objective analysis of your operations.

Are they going to find problems? Yeah, they probably are. But, admitting that you have problems is different than ignoring or hiding the facts. Accreditation processes bring things out into the light; where they can be resolved. We’ve got to start doing the right thing… in practice, not just in word.”

Be sure to join the discussion today!