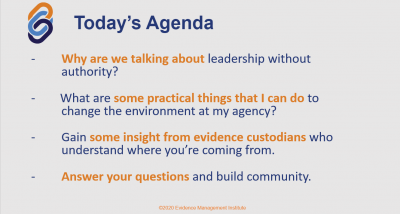 Shawn began the webinar with a short presentation that addressed the first two bullet points above. Regarding why they were talking about leadership without authority, he said,  “I would say that in many agencies, evidence custodians are generally civilians who are living in a world built for sworn officers. I was a sworn officer – and then I supervised the evidence unit for a number of years – but the people that worked in the unit before I got there were all civilians. They felt marginalized; and they felt like they weren’t a part of the operation.

There are a couple of good reasons for that. One is because evidence custodians are the original ‘social distancers.’ There is a reason that we exist behind locked doors; we want to keep our chain of custody secure.

Another thing that’s true about evidence units is they all have to compete for resources. In law enforcement, the first two priorities are naturally… operations and investigations. And sometimes, there’s not a lot left at the end of the budget cycle. So, evidence managers often find themselves in a position where they have an acute awareness of what’s wrong in their operations, but they lack the means to solve their problems. That’s a maddening existence.

So what is leadership without authority? I think when we take rank out of leadership, it makes leadership possible. Taking ownership and getting stuff done? At the end of the day, that’s the most important thing.

I also like to encourage people not to think of themselves as a warehouse clerk. You are the curator of a museum of every horrible thing that’s ever happened in your jurisdiction, and it’s important that we take care of that stuff and manage it because it makes a difference in the lives of our community.

When evidence is properly managed, that evidence possesses the power to exonerate the innocent and convict the guilty. That’s a pretty powerful thing. Properly managed evidence can speak for victims who are no longer able to tell their story. I didn’t really get that until I worked a homicide involving a child years ago. I looked at that evidence and realized this kid is never going to be able to tell their story. I’ve got to tell the story for them, through the evidence that we’re storing.

One of the best ways to lead without authority is to gather knowledge, to become an expert, to know your policies and procedures better than anybody else. To know the standards and best practices. I would also encourage you to learn more about state and federal law and to be knowledgeable of the biological evidence handbook from NIST. It’s an incredible document that will give you a wealth of information about evidence management.

RELATED: Using Your Evidence Room Data As An Analytical Tool

We’re talking about measuring things like: your disposition to intake ratio, intake time, and correction resolution. Meaning, how many messages do you have out to officers to fix their evidence? How many of them are responded to, how long does it take them to respond? SANE kit analysis is a great one to track. The fact that you are achieving a hundred percent analysis for all those kits is important. Those are all great measurements that you can use to bring to your chief or to bring to your commander and communicate a problem mathematically. 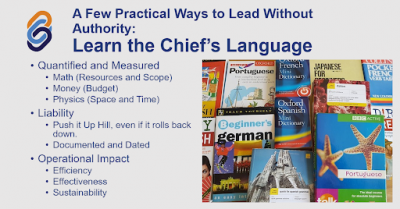 Learning to Speak a New Language

Chiefs, executives, and commanders speak a different language than we do. So you’ve got to learn to speak in a language that resonates with him or her in order to get things done and to get the resources that you need. There are different dialects that resonate with police chiefs… things that are quantified and measured.

Chiefs and police executives also respond to the language of liability. When they are made aware of a liability and you communicate the solution to them…

Another great thing to do with a chief, a police executive, a sheriff… is measure the impact on your operations. How’s it going to make you more efficient? How does it make you more effective? How’s it gonna make you more sustainable? Those are things that resonate with police chiefs. But, don’t bring complaints. Bring your solutions to a well defined problem. You’re going to have a much greater chance of being successful.”