In Part 1 of this webinar, Shawn Henderson, Executive Director of the Evidence Management Institute, (pictured below) reviewed the types of questions you would be asked on the E-Health Check, and encouraged you to take advantage of the FREE evidence management questionnaire. After answering 71 questions – which takes about 20 to 30 minutes – you will receive an assessment report that’s approximately 20 pages. 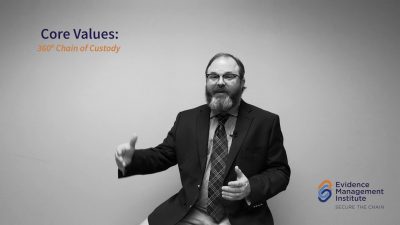 In Part 2 of this webinar, Shawn reviewed the details of the report and addressed some comments and questions from the attendees of the webinar.

Shawn began this part of the webinar by saying, “Okay, I’ll just describe what the report looks like. It will show who it’s prepared for and then we explain what the chain-of-custody strength ratings mean: Strong, Average, Susceptible, or Broken? We explain what we mean by ‘system flags’ and recommendations, in order to give you a baseline for understanding what the survey is all about, and then we get right into the analysis. 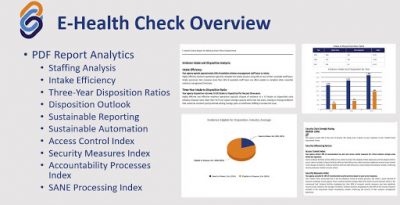 The first thing that you’ll see rated is administrative support. Depending on your responses, we’ll talk about your agency’s current level of support for evidence management and make some suggestions based on that.

Then we go over some red flags and you’ll get an idea of some of the responses that set off the flags in the system. For every flag, there’s a recommendation and you’ll see the same thing as we go through intake and disposition.

For example, the sample client spends half their custodial time on intake at this agency and it gives an explanation of that. The report also gives the three-year intake and disposition ratios. All that information should be available to you because it’s useful and can help to establish the type of support you need. 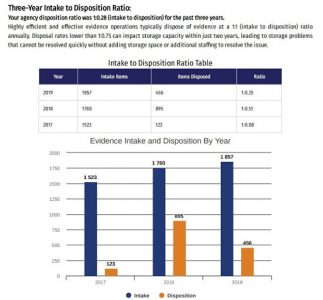 The next part of the report shows how many hours and years it would take you to dispose of the evidence; and then we index that with your staffing levels. We give you some graphs that will show you the amount of evidence that’s eligible for disposition. The example that probably makes the most sense is this industry average that we talked about earlier. There was a 45,000 item storage level at that agency, and they probably have 38,400 items that are eligible for disposition.

I’m just going to kind of skim through here…. The first ‘chain-strength rating’ is Training. This particular agency didn’t do a lot of the things with respect to training policy or procedure that we recommended at the Evidence Management Institute. So, their rating would be ‘Broken.’ We would explain why, and discuss the red flags. And we’ll do the same thing for Storage, Organization, Packaging, Technology, and Security.

The last section is about Accountability. How many accountability measures do you participate in? In this section, we’re talking about inventories, inspections, and audits. That information should be at your fingertips.

The last page – outside of the recommendations – is Next Steps. That concludes the report. And, like I said, it was 18 pages of data and information. Hopefully, that gives you an idea of what the report looks like and how you can leverage it to your advantage when trying to make changes and get support from management.

I just want to talk real quick about why we think this is important and how we are able to offer it to you for free. I really believe that there is an actual benefit to using this E-Health Check. I think that it has the potential for you to leverage this information at your agency and make a difference by helping your Chief understand the issues that you’re facing – quantitatively and mathematically – with real data from your agency.

It took time and money to create something tangible, that’s of real value to you. But, the costs are underwritten by the Evidence Management Institute and by Tracker Products; who we’re partnering with.

We both believe strongly that there is real value in getting useful information and helpful tools into the hands of people that need it the most –  regardless of where they train. Obviously, I would like it to be with EMI – and I know Tracker would obviously love to have you use their software – but, regardless… This is important information that could make a real impact for your agency.

Nobody’s going to use your information to make a hard sell. We want this to be a tool that has value, in and of itself. It will help you to better understand what’s going on in your evidence room, so that you can sit down and have a discussion about what you’re dealing with.

Theresa Wallace – who was on the webinar a couple of weeks ago – said that she used the results to go back to her agency and her comment was very simple… It opened up the eyes of the rest of the command staff.”

RELATED: USING YOUR EVIDENCE ROOM DATA AS AN ANALYTICAL TOOL

Ben Townsend, CEO of  Tracker Products, who was on the webinar with Shawn, said, “I just want to remind everyone about the Evidence Management Community Forum on Facebook… It’s open to anyone who is involved with evidence management. There are already over 500 members, and we see that lots of questions are being posted in there. I love the communication that’s going on. I’d really like to see it take off long term; to where you guys work with each other. The objective is to elevate the discussion by giving you guys tools to communicate with other people and get better access to what’s going on with your peers.”

Shawn added, “I see a question at the bottom of the screen…. Is there a limit on how many times a year you can do this? The answer I would give you is no. There’s not technically a limit on the number of times a year that you can do it. But, I would say that the cost for us is based on the number of downloads. So, hopefully, this is not something that you just would download seven times a day for fun and then just never save it as a document. I would encourage you to save the report on your own system as a PDF.”

Ben said, “We have a question, that I’ll read out to you, Shawn… When it comes to time management – for the sake of the questionnaire – how do you account for additional duties such as: property viewings, field call outs, public and internal releases, phone calls, and additional duties that P&E gets jammed with?”

There are a lot of agencies where there are full-time evidence custodians and they have no other auxiliary duties. So, they would be a hundred percent evidence management. Someone that spends 50% of their time in patrol or crime scene and 50% of the time in evidence management, I would do a 50/50 ratio.

The term evidence management is wide. Public releases, property viewings, phone calls, letters… all the stuff that you do in order to process evidence in or out, I would consider that evidence management time. Anything that is patrol or investigative – or if you have to work in records or do jail duties – that would be not evidence.”

Ben said, “ I would just like to add that the reason these webinars are taking place, and the reason the Facebook Community Group even got started was because of COVID19. I’m hoping five years from now – when there are 2000 members in that Facebook community group – you guys are going to remember the fact that we literally started this because of the lockdown.

The assumption was… We’re now in a totally different world where people are on lockdown. Let’s start giving them things that they can do during this downtime so that when you come out – and we will come out – you’re ready to hit the ground running. Ready to start moving forward on some of these things.”

Ben asked Shawn, “How many hours did you spend in the last two weeks getting this report to automatically generate?”

Shawn said, “On this version? I probably spent 120 hours in the last couple of weeks. I wouldn’t have been able to do that, had it not been for the lockdown. That’s another thing that we want to encourage people to do… This is a great time to take advantage of the lockdown by capturing and leveraging things for your agency. You can work on dispositions, watch our free training classes, or just accomplish something else that you wouldn’t otherwise have the time for.”