Featuring – Ben Townsend, the CEO of Tracker Products, Shawn Henderson of the EMI.

Today’s article contains excerpts from a recent webinar – the 3rd in a series – called Disposition: Learning and Trial Case in BGPD, about the importance of evidence disposition.

Ben Townsend of Tracker Products opened the session with introductions and a brief overview of the webinar. He said, “Today, we’re going to go to Shawn Henderson; who has prepared a small nugget of what he would present in a paid EMI class. And for the people that are on here today, watching this online, you’re going to get this for no cost, but there’ll be a huge benefit to it.”

Shawn Henderson (center) presented his credentials in the screenshot below…

The 10 minute Guide to Evidence Disposition

Shawn addressed this topic, by saying, “Today we’re going to focus on four things: the evidence disposition process, what you need to know about disposition ratios, why officers need to be involved with researching and approving dispositions, and we’ll also give you some disposition resources that you can use. That’s something that you might not otherwise know about unless you popped on a forum with other evidence managers.”

Shawn shared some “Fun Facts About Evidence Disposition,” in the screenshot below… 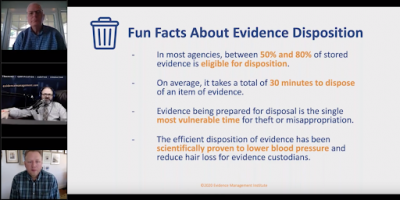 He continued by saying, “Disposing of evidence efficiently, effectively, and sustainably is a big deal because it’s related to the two most critical commodities in evidence management: time and space. We are always in a war against the laws of physics. We never seem to have enough time to do the things that we need to do, and we can run out of space if we don’t manage our evidence efficiently.”

Shawn addressed today’s disposition discussion, saying, “This is not intended to be exhaustive; it’s just to give you a quick overview. The disposition process begins with eligibility and then there’s identification, research, notification, authorization and physical disposal. There’s so much that goes into disposing of a piece of evidence, [that] most people outside of evidence management never think about.”

Eligibility is contingent on four different factors: required retention, case adjudication, the time of appeals – or the sentence of the offender if they are incarcerated – and certain limitation statutes. From state to state, everyone deals with different issues with respect to evidence disposition. So, the key concept for eligibility is… we want to retain it as long as we need it, but we want to get it out of our evidence room as soon as possible.

Identification – Shawn said, “We ought to have the ability to have information pushed to us. We know the general limitation times or the general retention times for most evidence. When it’s automated… you’re not walking around your property room and having that little pen and paper experience. So, having that information pushed to you is critical. You can’t dispose of evidence efficiently if you don’t have an efficient system to identify eligible evidence.”

Research – He said, “We’ve got to define what we’re researching; what the requirements are for disposing of evidence. That can be based on the adjudication of the case. That can be based on the statute of limitations, or expiration. It can be an administrative procedure – where you’re  allowed to dispose of evidence if you’ve got the support of your local courts of record and your administration. But there is some level of research involved with every piece of evidence to make sure that it’s eligible.”

Shawn (now shown at the top-left of the screenshot), included the following slide regarding the last step in the disposition process: Physical Disposal. 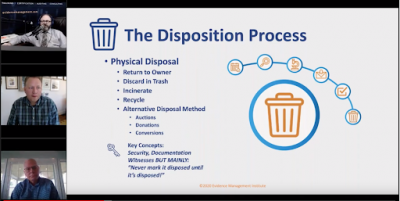 Physical Disposal – “We will have more opportunities to talk about evidence disposition – with respect to physical destruction of evidence – but the most important concept when it comes to physically disposing of evidence is that you never mark it disposed, until it’s actually disposed. I’ve been in property rooms doing audits and we would constantly find items sitting on the shelf that were marked disposed. Well, if they were marked disposed, but they weren’t gone, then something went wrong.”

RELATED: EVIDENCE MANAGEMENT – THE GUY WHO GOT IT RIGHT!

Shawn moved on to the important topic of Disposition Ratios, saying “One of the key performance indicators that you should be monitoring is your intake-to-disposition ratio. The ideal disposition ratio is 1:1 – one item comes in and one item goes out. The minimum effective ratio is 1 to 0.75. If you take in one item and you dispose of 0.75 items – or if you take in four items and you dispose of three items every year, you’re going to be sustainable for quite a while.” 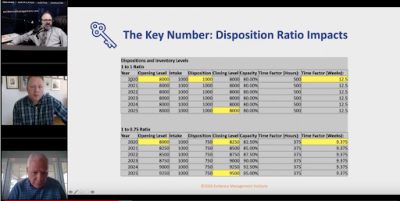 Explaining the chart above, Shawn said, “If you look here, at the top half of the screen, that’s a one-to-one ratio. In 2020, they brought in a thousand items and they disposed of a thousand items. Six years later at a 1:1 disposition ratio, they still have the same amount of items that they started with. 80% capacity is a sustainable number.”

At a 0.75 ratio (shown in the bottom half of the chart) – “When they started, there were 8,000 items in their property room. They took in a thousand items, they disposed of 750 items. You can see over time, the capacity of their evidence storage facility builds up. They went from 8000 to 9,500 items at the end of six years.”

Shawn ended this topic with some eye-opening facts, “When you look at agencies where it’s one item coming in and only half of an item going out…  in four years, they’re going to be at a hundred percent capacity. I mean you can predict these things mathematically. At one to 0.25%, they’re going to reach capacity in three years!”

Why Officers and Investigators Need to be Involved in Evidence Dispositions

About this topic, Shawn said, “When you look at one of the main failure points for evidence disposition, it’s a funnel. If you’ve got an agency with 50 officers and you’ve got one person doing all the research for evidence disposition, all of that work falls into one little funnel. And it’s that stopping point that really chokes your ability to identify evidence, to research evidence, to notify owners, and to get those appropriate authorizations. So if you’re thinking about bringing this up to your chief or to an executive and trying to get officers more involved in the process, most of the time they are reluctant to add more responsibilities to their officer’s plates; especially for patrol and investigations. 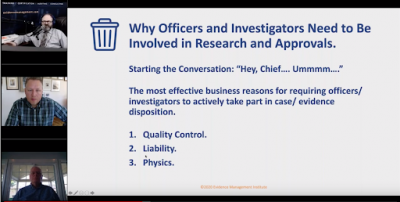 I have found that when I bring this up to chiefs and I tell them, officers need to be involved in evidence, disposition, research and authorization because there’s no quality control at your agency. If you’ve got a police officer that files 10 DWI cases or 10 dope cases in a year, but he has no idea how many of those cases were adjudicated, then that officer has no idea what the quality of his work is.

Number two is liability. It is a liability-exposure for us to not dispose of evidence effectively or efficiently. That opens us up to a liability that we don’t need. That’s another great way to speak to chiefs because they respond to liability, they respond to quality control.

If neither of those work, just use physics… ‘In three years chief, we’ll run out of space. I don’t know where you want to put it all, but in three years you’re going to have to make that decision’.”

Shawn closed his portion of the webinar with the following tips, “I’m going to tell you about three things that we’re going to put on the Facebook Community Page. 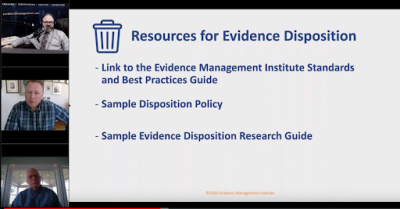 One is a link to our evidence management standards and best practices. I’m also going to post a sample evidence disposition policy. This is something that you can use as an agency just to look at your own policies. You might see something that you might be able to take back and use or change in your own policies. But, I’m also going to include an evidence disposition research guide. Your agency is going to be different. You’re not going to be able to use the same procedures but you can look at the same process. Hopefully they’ll be of some use to you.”