Featuring Ben Townsend, the CEO of Tracker Products, Shawn Henderson of the EMI and their special guest: David Bragg of the Bowling Green Police Department (BGPD)

Ben (top-left of the screenshot below), began this portion of the webinar by saying, “If we took a poll of the people that are in the crowd here today, and asked them: Are you effectively maintaining a one-to-one or even a one to 0.75 disposition rate, most people would unanimously say… ‘I’m having disposition problems. I’m not getting buy-in from my agency. The courts are lagging – multiple years – behind.’

But, one of the hardest things to do is… making change; doing something different. You want to create all sorts of chaos in your world, or people around you? Simply suggest doing something differently. But, today’s guest has been successful with changing the status quo. So David, please take the floor and share with us what it is you’re doing to make significant change in Bowling Green.”

David (bottom-left of the screenshot above), introduced himself, saying, “I’m serving a municipal police department with 125 officers, and about a 70,000 population. Here are some problems I’m going to throw out to you that interfered with our purging or disposition process. In Kentucky, we have two divisions of criminal court. We have a district court division – which handles misdemeanors and traffic cases – then we have a circuit court division, which handles felony cases.

We’ve got three district judges within our misdemeanor courts and we have two circuit judges within our felony courts. And each of those courts has an elected prosecutor who operates autonomously, so they’re not connecting with each other. That poses a problem… we’re dealing with two prosecutor’s offices. Our misdemeanor evidence is not an issue [anymore] – and I’ll address how we overcame that problem – but our felony evidence has had a problem with getting dispositions from the court. In Kentucky, we have no statute of limitations. So, if you have a bicycle that’s worth $500, and it’s stolen, that’s a felony. You can prosecute that case 30 years from now. That’s a problem with disposition and purging of evidence.

About this topic, David said, “I want to address the misdemeanor part of it first. About seven years ago, we brought our prosecutor – that handles misdemeanor cases – into our evidence room and said, ‘Look…here’s our problem.’ We showed her some of these graphs and charts proving that we have got to have some relief.

RELATED: USING YOUR EVIDENCE ROOM DATA AS AN ANALYTICAL TOOL

She was kind of astonished. We were sitting on misdemeanor evidence, that was probably six or seven years old. She came up with the idea to draft an administrative order – that’s very broad; not case- specific – asking the judges [to give] officers authorization to dispose of misdemeanor evidence, 90 days post the adjudication date. The judges were on board with that. 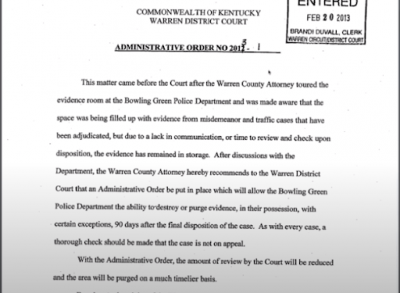 That’s been an order since 2013 and [now] we essentially don’t keep misdemeanor evidence more than a year. This relieved the prosecutor’s office from getting those mass requests for court orders [related to] dispositions.”

About this topic, David said, “Our felony evidence, with the circuit courts, is a different matter. We’ve battled that for several years. The prosecutor doesn’t have to store it; doesn’t have to come up with creative ways to handle that… or possibly build-out. It’s not affecting his budget at all. So, [disposition] takes a backseat with a lot of prosecutors.

We brought our prosecutor in, that handles those cases in circuit court, and we pretty much said, ‘We have to have some relief and this is what we’re going to do…We want your blessing.’ 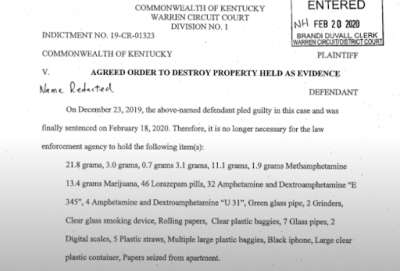 Now, the prosecutor’s office will either do a destruction or a forfeiture order, whatever the case may be. The defense attorney will get a copy of that prior to the file sentencing court date. And then when they meet –  for final sentencing from the judge – everybody’s on board with this [request for disposition]. The defense counsel signs the order. The attorney representing the state will sign it, and the judge will issue the order immediately.

It’s been in existence for about a month and we were getting orders, every day [until COVID-19 hit], from the clerk’s office where these orders were being issued during final sentencing. The court has authorized the destruction of [the evidence] no earlier than 60 days from the final day of this court order. This gives the defendant enough time to file an appeal and/or withdrawal plea if they so desire. So, that, in itself, is very promising.”

About Auto Disposition, David had this to say, “If you’re a user of SAFE, then you’ll see a ratio chart is built into it that shows your collection and your disposal. What happens with ours, is we have periods of spiking, and that spiking indicates to us that we’re primarily focusing on purging maybe one time a year or twice a year. By implementing some of their solutions, we hope to see that’s more of a one-on-one [one item in, and one item out] throughout the year.

Ben addressed this common phenomenon, saying, “What I generally see, is there are these large spikes, because most people are sending out a large packet of requests, and you get them all back at once. Maybe over a year’s period of time – with SAFE’s auto disposition software being implemented – that line would flatten out a little bit more, versus these large spikes.”

David agreed saying, “The problem with using paper [in the past] is that you get those purges once a year, and when you have 125 officers working on dispositions all at once, the prosecutor’s office gets flooded with these requests. So what happens? It gets pushed to the back burner. We’re back in that revolving door… where next year the officers are addressing the same things they had done the previous year, the prosecutor’s office getting the same thing that they had gotten the previous year. And that won’t work. But, the Chief has already given the nod for auto disposition; I think that will eliminate the problem.”

Ben ended this topic by saying, “I love how you built it into the normal court process, to get them to buy in and say, ‘Hey, I won’t bring that large stack of papers and just toss it on your desk [once or twice a year], we can just build it into the process’. I think another important part of what you said is… bring them down to your office and have those statistical graphs that say: we are running out of space. When you get people sitting at the table and you’re giving them statistical data – that says this is the date [we’re going to run out of room] – it’s going to be a lot harder to say, ‘No, we’re not going to do anything about it.’ Because, there’s going to come a day where this is going to become a real problem.”

Q & A from the Audience

Attendee question: “What happens when you don’t have the time – or your agency doesn’t see the importance of giving time – for this?”

Answer from Shawn: “You’ve got to be able to change that narrative. There’s no shortage of problems in evidence management, so we’ve got to start figuring out what the solutions are. I think one of the best ways to do that is to start communicating your problems mathematically. Communicate the problems in ways that chief executives and commanders understand. If you can attach a liability to an issue – what the agency’s liability is for failure to comply – then that helps them make a decision.

We’re always in a battle for resources; whether that’s time, or money, or space. In order to tip the scales in your favor, you’ve got to be able to quantify the issue. You can’t just tell your Chief, ‘Man… we’re not able to dispose of evidence. It’s terrible. It’s just piling up.’ But, if you can tell a story mathematically… We have 80,406 items in our property room. We are at 85% capacity for storage. We have 15% of our capacity left. We are going to be out of space in three years. If nothing changes that’s on them.”

Ben’s comment: “Another reality of the world is… you’re probably not going to get more resources. So, the biggest question I’d have is: what are you doing with your time? Not that you’re doing invalid things with your time, but I would want to sit down and look at that from an audit perspective – like Shawn would do – and say, ‘Okay listen, we have to come up with time somewhere to work on these things. What’s the best balance to strike?’ Like maybe there’s something in your week that’s taking a significant amount of time that you could offload elsewhere and spend more time focusing on these types of activities.”

David’s comment: “I do a year end analysis; it’s kind of a snapshot of what our evidence room looks like. Three years ago I was telling [management], ‘Look, by the end of 2019 we’re going to reach maximum capacity of storage. So, something’s gotta give and they recognize that because they were looking at the data. You just can’t say it. You’ve got to show it. That’s also the reason they’ve given the nod to auto disposition. And the chief used this data –  with other supporting data – to convince our board commissioners to build a new bulk-storage facility.”

Attendee question: “Do you ever find that officers don’t want to get rid of anything… or officers would just say get rid of it all?”

Shawn’s answer: “Officers are generally going to fall into one of those two camps: either the submit-it-and-forget-it…do whatever you want, get rid of it all or… we have to keep that forever because it’s part of my little museum of horrors. And both of those are wrong. So, you have to write in your policy that ‘We get rid of evidence, we dispose of evidence when it is appropriate and when the time when the required retention period has expired, we dispose of evidence.’ You have to define what that is, and then give your officers very specific responsibilities. The first thing to do, is make it their responsibility in policy.”

In closing, Ben encouraged you to join the discussion by saying, “I’ve got a great note from Theresa Wallace. She said, ‘I really appreciate hearing how someone else does this. My mind is blown.’ So, as we end this, please go into that chat group and put information in there that is beneficial to other people.

This is not ‘the gospel’ by David Bragg or Shawn Henderson; certainly not the gospel by Ben Townsend. We simply are trying to create a discussion and I would love for somebody else to come back and say, ‘You know what? I watched that disposition thing. I did bring my prosecuting attorney in and we’ve now implemented this process in our city and it’s beginning to make some change.’ This is where having the conversation, learning how other people are doing it, and then sharing your results with other people benefits them. If you’d like to be on a panel, or if you’d like to see something discussed… put it out there. I mean, we’re going to use this time [during COVID-19] to its maximum benefit. Whatever we can discover that’s useful, that’s made our day worthwhile.”

Be sure to join the discussion today!